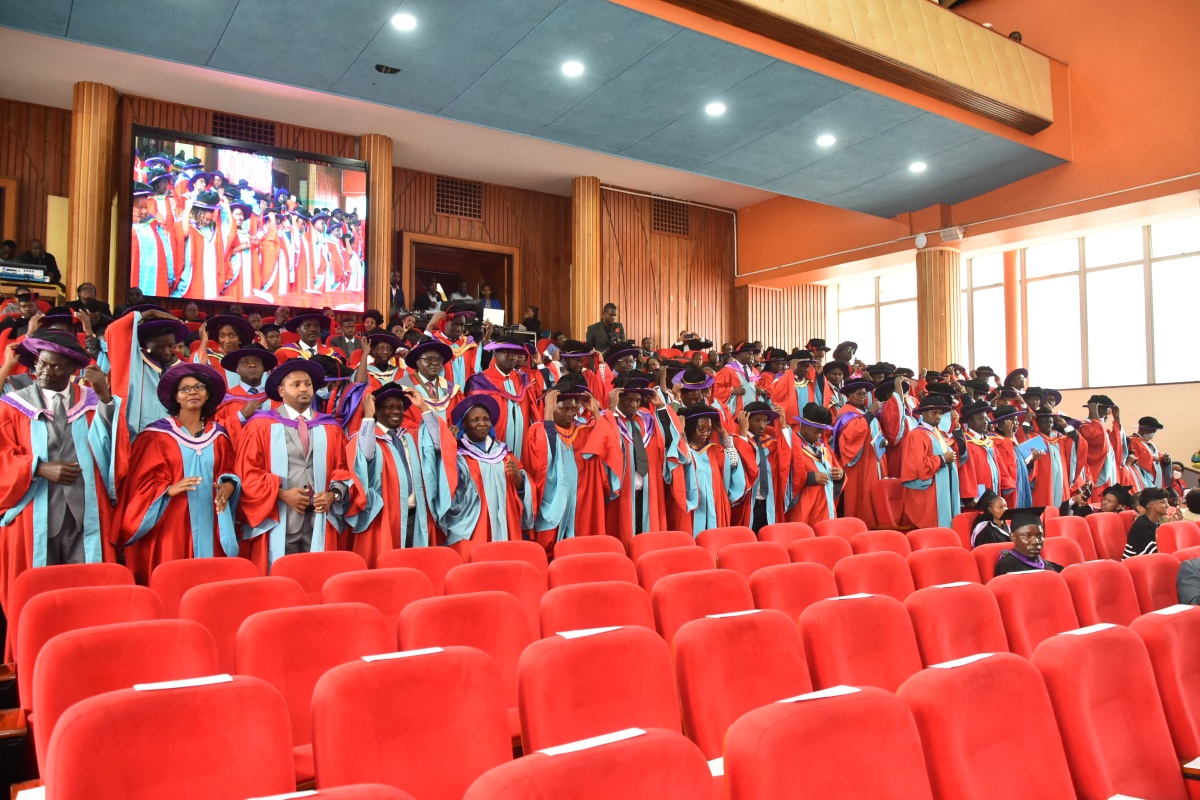 The University of Nairobi over the years has upheld the culture of celebrating its academic achievers through graduation ceremonies, it was no different this year, on 23 September 2022, the University of Nairobi held its 67th graduation ceremony. The hybrid event a mix of virtual and an onsite ceremony for the PhD students was held at the Famous Taifa Hall, one of its kind in the nation.

During the auspicious event, a total of 3553 Graduands were conferred with degrees and diplomas and one Honoris Causa.  A total of 85 PhD 595 Masters degrees, 2508 Bachelor degrees, 62 Post Graduate Diplomas and 302 Diplomas were conferred to the well deserving graduands for their accomplishments.  One honoris causa degree was awarded to Prof. Patrick Verkooijen , Chief executive officer  at Global Centre for Adaptation for his numerous and momentous efforts in combating the major challenges facing the World and distinguished leadership career in climate change and Adaptation.

"Class of 2022, we have made it! " were the words of jubilance said by Cynthia Wahito, valedictorian who gave a  speech on behalf of the 2022 class. Cynthia reminded the graduands that graduation is just but the start of a new phase in their lives, "unlike a book we can't skip through the pages, we have to go through all these phases of life one at a time”. Wahito urged her colleagues to take their certification as an alternative way to change the world and not just as an escape door from their current situations in life quoting the Famous words of Tom Brakel.

In his welcoming remarks, the Vice Chancellor Prof. Stephen Kiama commended all the graduands and in particular expressed his delight in the quality research work produced by the PhD graduates. The VC noted that the research was quite relevant to the contemporary issues in the world, which he noted helps the world counter the ever-changing and emerging problems in the world. He further called for more collaborations and partnerships to enable more PhD students to carry out cut-edging research in key areas of development. The VC went on to ascertain the institution's commitment to producing great talent for the Country's various fields and the globe at large, noting that some of the great achievements the university has attained have been attributed to the numerous reforms initiated by the institution

Amb. Simon Nabukwesi,  the PS at the Ministry of Education and the ministry’s representative at the historic event expressed his distinct pleasure in joining the institution's fraternity in congratulating the graduands. The PS echoed the VC's words on the numerous financial challenges universities in the country are facing, he expressed his delight in how UoN  under the leadership  of Prof Kiama and chancellor Dr. Rattansi have worked on coming up with internal solutions to these problems. Amb.  Simon called upon the University's fraternity to embrace teamwork for the greater good of the University, urging the graduands to be the institution's brand ambassadors in all their endeavours.  “A man who does a fifth of his ability can rule the world, “the PS Quoted Albert Einstein in urging the graduands to go forth and do more for humanity.

The Chairperson of the University’s Council, Prof Miriam Were sent her hearty congratulations message to the graduating class, she promised the council’s support to the university in research and entrepreneurship by strengthening the policy framework.

Dr Vijoo Rattansi publicly welcomed the Chair of the Council Prof. Miriam Were and promised her the University's support in all the council's endeavours. The UoN's capable Chancellor reminded the graduands of the many obstacles on their path to success, however, she encouraged them with the words “After every climb at the top of the mountain good things are to be found at the top”, she went on to name several individuals who weren't held back by their age and accomplishing great feats. "Finally my graduands always remember that your University needs you " reminded the chancellor;  urging them to be steadfast in joining the alumni association an important role in securing the University's future and to a larger extent the promise of the nation.

The entire University wishes to congratulate all the graduands and in the famous words of Hollywood actress, Lupita Nyongo reminds you that your dreams are valid.